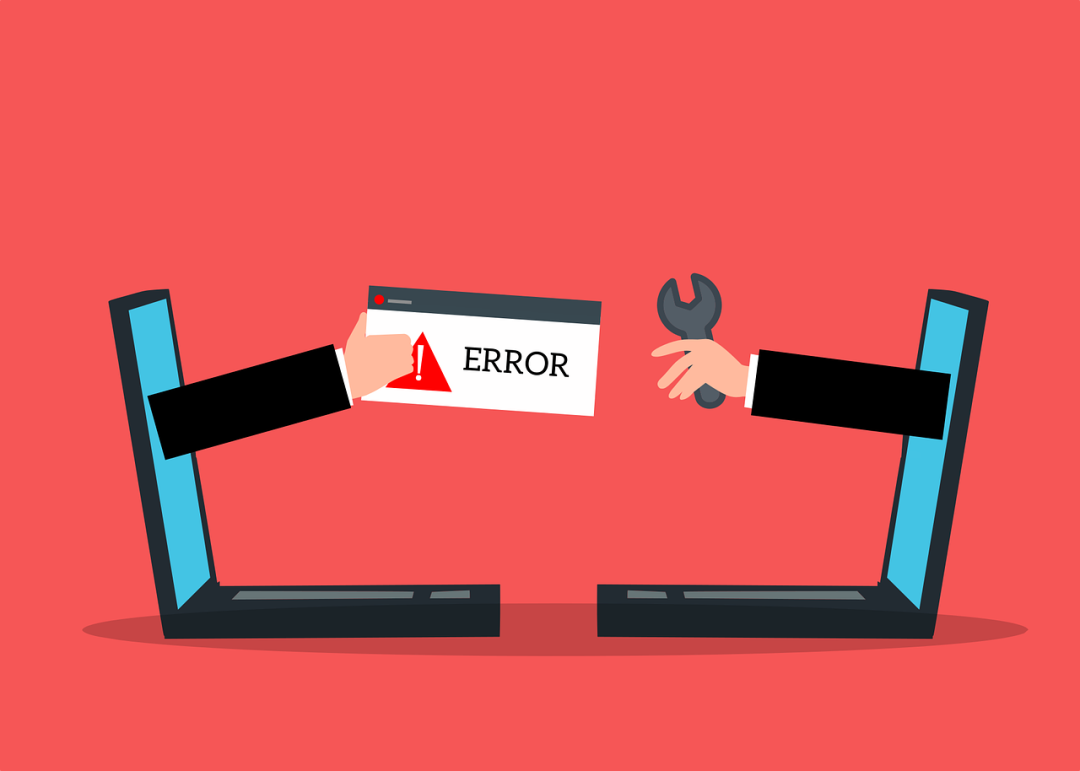 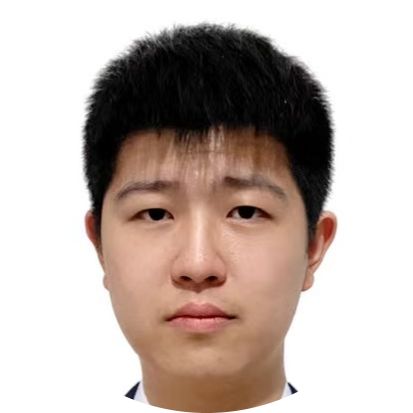 Big Data Engineer, Cisco Hangzhou, is responsible for big data development, such as Spark and the scheduling systems. We encountered many problems in using the original scheduling platform to process big data tasks. For example, for a task of processing and aggregated analysis of data, multiple pre-Spark tasks are used to process and analyze data from different data sources firstly, and the final Spark task aggregates and analyzes the results processed during this period to get the final data we want. Unfortunately, the scheduling platform could not execute multiple tasks serially, and we had to estimate the task processing duration to set the start execution time for multiple tasks. If one of the tasks fails to execute, subsequent tasks need to be manually stopped. This is neither convenient nor elegant. To our surprise, the core function of Apache DolphinScheduler - workflow definition can connect tasks in series, perfectly fits our needs. So, we introduced Apache DolphinScheduler into our big data platform, and I was mainly responsible for the Alert module reform. At present, other colleagues are promoting the integration of K8s, hoping that future tasks will be executed in K8s. Today, I will share the reform journey of the Alert module.

The Apache DolphinScheduler alert module is an independently started service, and one of the cores is the AlertPluginManager class. The alarm module integrates many plug-ins, such as DingTalk, WeChat, Feishu, mail, etc., which are written in the source code in an independent form. When the service is started, the plug-in will be parsed and the configured parameters will be formatted into JSON, by which the front-end page will automatically be rendered. AlertPluginManager caches plugins in memory at startup. The AlertServer class will start the thread pool and scan the DB regularly.

When the workflow is configured with a notification policy, the Worker executes the workflow, and the execution result matches the notification policy successfully. After inserting the alarm data into the DB, the thread pool scans the DB and calls the send method of the AlertSender class to transfer the alarm data. Alarm data is bound to an alarm group, which corresponds to multiple alarm instances. The AlertSender class traverses the alert instance, obtains the plug-in instance through the AlertPluginManager class, calls the instance's sending method, and finally updates the result. This is the entire alerting process of Apache DolphinScheduler.

It should be noted that the RPC service is also started when the Alert server is started. This is an alarm method designed for special types of tasks, such as SQL query reports. It allows workers to directly access the Alert server through RPC, and use the Alert module to complete the alarm, while the data is not written to DB. But on the whole, the alarm mode of Apache DolphinScheduler is still based on the way of writing DB and asynchronous interaction. 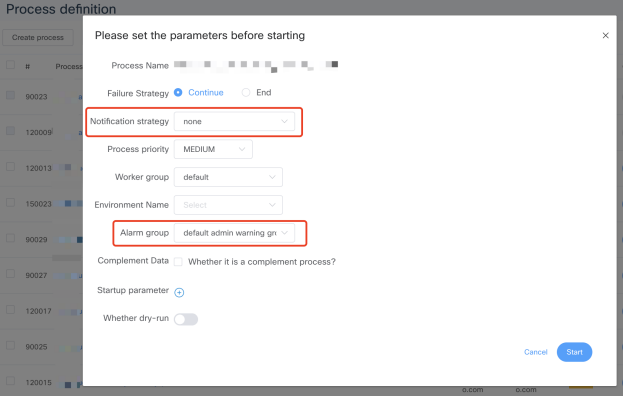 After defining the workflow, you can set the notification policy and bind the alarm group before starting.

The above figure is a flowchart of system alarm configuration. It shows that a workflow can be configured with multiple task instances, tasks can be configured to timeout to trigger alarms, and workflow success or failure can trigger alarms. An alarm group can be bound to multiple alarm instances. But this configuration mode is not reasonable. We hope that the alarm instance can also match the status of the workflow/task instance, that is, the success and failure of the workflow call the same alarm group, but trigger different alarm instances. This is more in line with the real scene. 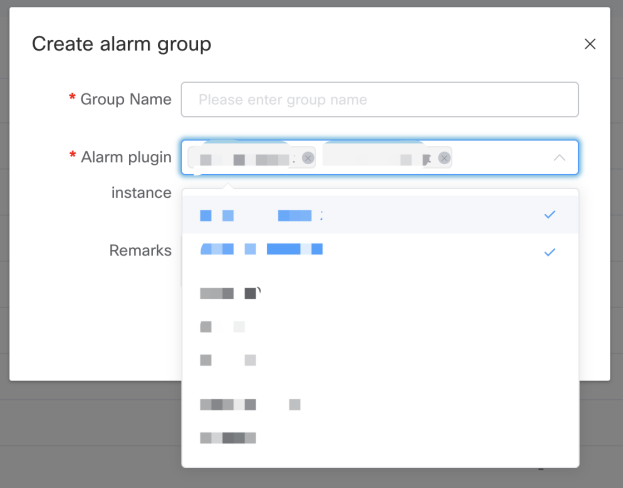 Create an alarm group that can be bound to multiple alarm instances.

The following are some common big data task alarm scenarios in our daily work. 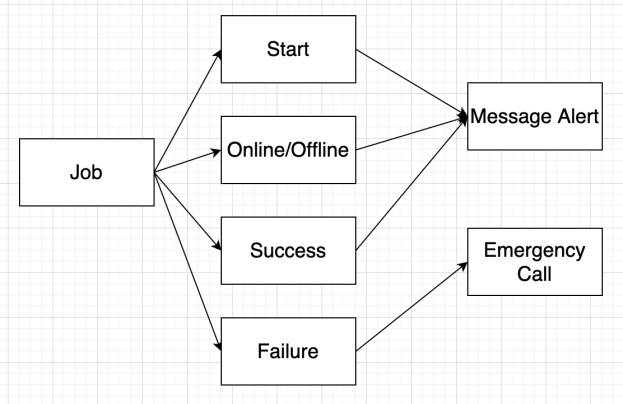 For scheduled tasks, notifications are sent before starting execution, when the task goes online, goes offline, or modifies parameters, whether the task execution succeeds or fails. While for different results of the same task, we want to trigger different notifications, such as SMS, DingTalk, or WeChat group notification for successful tasks, and if the task fails, we need to notify the corresponding R&D personnel as soon as possible to get a faster response, and at this time, @corresponding R&D personnel in the DingTalk or WeChat group or phone notification will be more timely. At present, the company's task scheduling platform is set to call the API in the task for notification. This method of strong coupling with the code is extremely inconvenient. In fact, it can be abstracted into a more general module to achieve.

Although the architecture of Apache DolphinScheduler meets the requirements of the actual scenario, the problem is that the page configuration of the alarm module can only choose to trigger the notification for successful or fail tasks, and it is bound to the same alarm group, that is, the way of alarming is the same regardless of success or failure, which does not satisfy our need for different results to be notified in different ways in a real production environment. Therefore, we made some changes to the Alert module.

The first refactor points to alert instance. Previously, when an alarm instance was added, triggering an alarm would trigger the send method of the instance. We hope that when defining an alarm instance, an alarm policy can be bound. There are three options: send if the task succeeds, send on failure, and send on both success and failure.

In the task definition dimension, there is a timeout alarm function, which actually corresponds to the failed strategy. 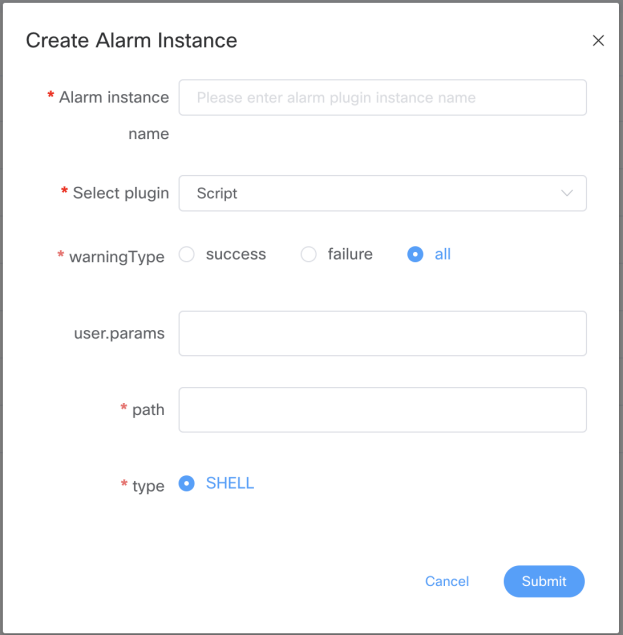 The above picture shows the completed configuration page. On the Create Alarm Instance page, we added an alarm type field, choosing to call the plugin on success, failure, or whether it succeeds or fails.

The above picture shows the architecture of the Apache DolphinScheduler alarm module after the refactor. We have made two changes to it.

For detailed design, please refer to the issue: https://github.com/apache/dolphinscheduler/issues/7992

See the code for details: https://github.com/apache/dolphinscheduler/pull/8636

In addition, we also put forward some proposals to the community for the alarm module of Apache DolphinScheduler. Welcome anyone who is interested in this issue to follow up the work together: