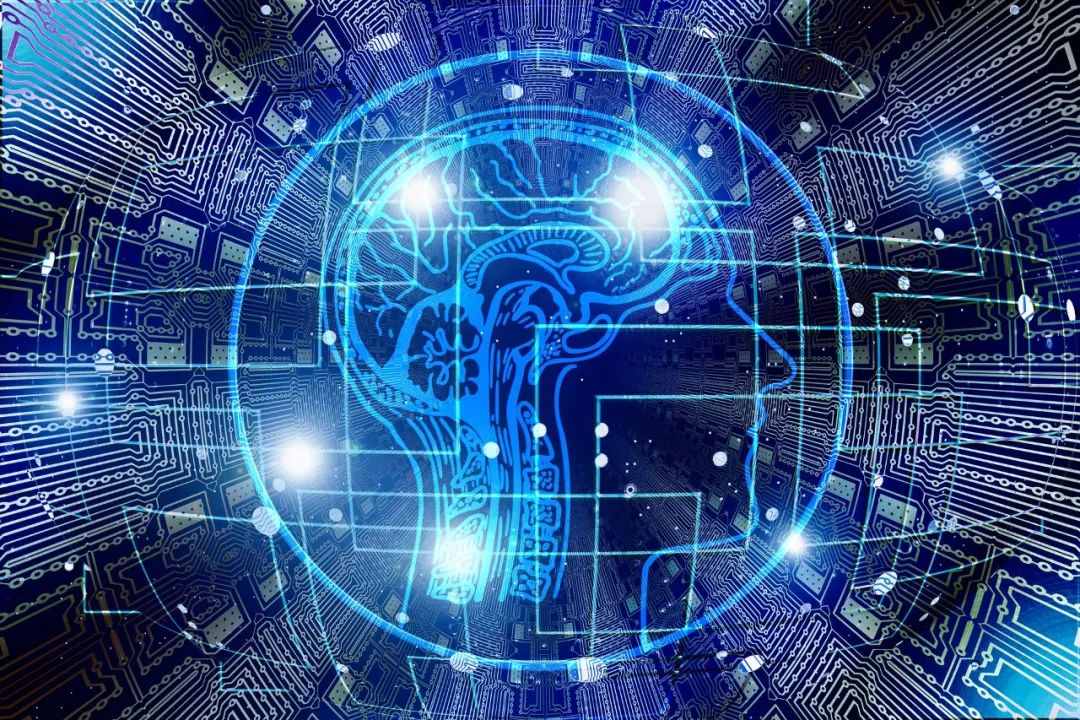 Kubernetes is a cluster system based on container technology, implements container orchestration, provides microservices and buses, and involves a large number of knowledge systems.

Starting from the author's actual work experience, this article shows us the use and technology sharing of DolphinScheduler in practice scenarios, hoping it can inspire those who have the same experience.

Why do we use DolphinSchedule? What value does it bring to us? And what problems did we encounter?

In the field I'm working in, the application of DolphinScheduler can quickly solve the top ten pain points of data development for enterprises:

I also encountered many new challenges in the projects launching various types of Apache DolphinScheduler:

After using Kubernetes to manage Apache DolphinScheduler, the overall technical solutions are quickly enriched and efficient technical features added, by which the above practical challenges tackled quickly:

The cases in this article are based on Apache DolphinScheduler version 1.3.9.

Automated and Efficient Deployment Based on Helm tools

First, let's introduce the installation method based on the Helm provided by the official website. Helm is the best way to find, share and use software to build Kubernetes, which is one of the graduate projects of cloud-native CNCF. 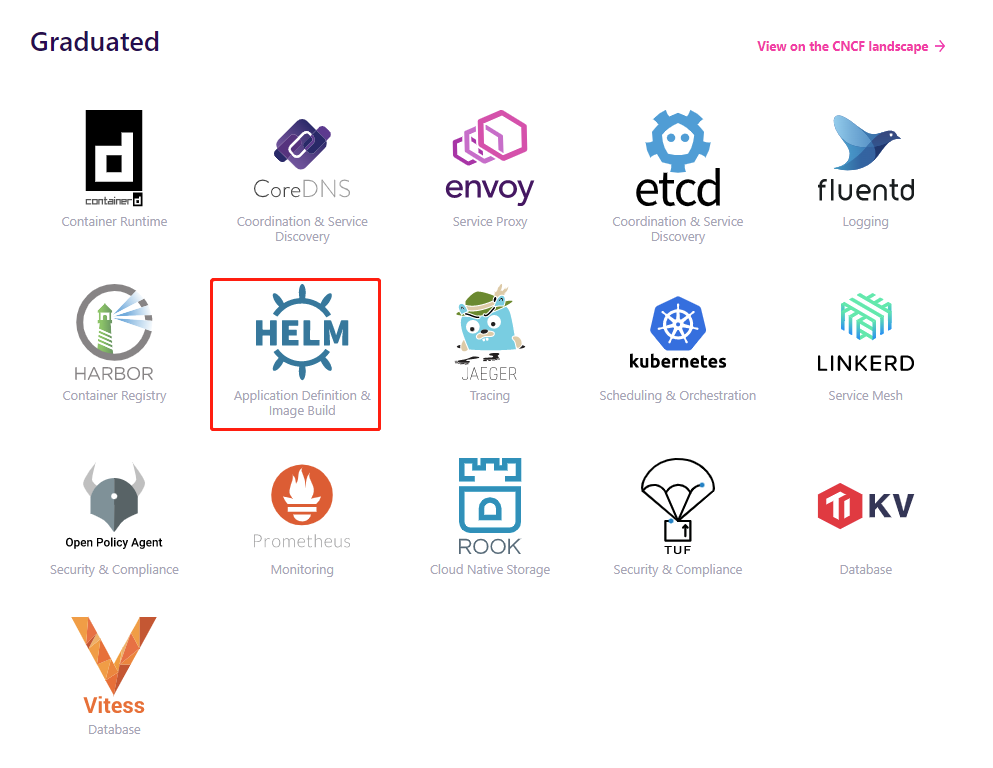 There are very detailed configuration files and cases on Apache DolphinScheduler official website and GitHub. Here I‘ll highlight some of the FAQs in the community.

Modify the image in the value.yaml file for offline installation (air-gap install);

Then replace the image information in the value file. Here we recommend using the Always method to pull the image. In the production environment, try to check whether it is the latest image content every time to ensure the correctness of the software product. In addition, many coders are used to writing the tag as latest, and making the image without adding the tag information, which is very dangerous in the production environment. Because the image of the latest will be changed once anyone pushes the image and it is impossible to judge the version of the latest. So, it is recommended to be clear about the tags of each release, and use Always.

Copy the entire directory of https://github.com/apache/dolphinscheduler/tree/1.3.9-release/docker/kubernetes/dolphinscheduler to a host that can execute the Helm command, and then execute

build and compile according to the prompt, and the file package is located in {DataX_source_code_home}/target/datax/datax/

Create a new dockerfile based on the above plugin components, and the image that has been pushed to the private warehouse can be applied to the basic image.

Save the dockerfile and execute the shell command

How to deploy GitOps based on Argo CD

Argo CD is a declarative GitOps continuous delivery tool based on Kubernetes. GitOps is an incubation project of CNCF and a best practice tool for GitOps. For more details of GitOps, please refer to https://about.gitlab.com/topics/gitops/ 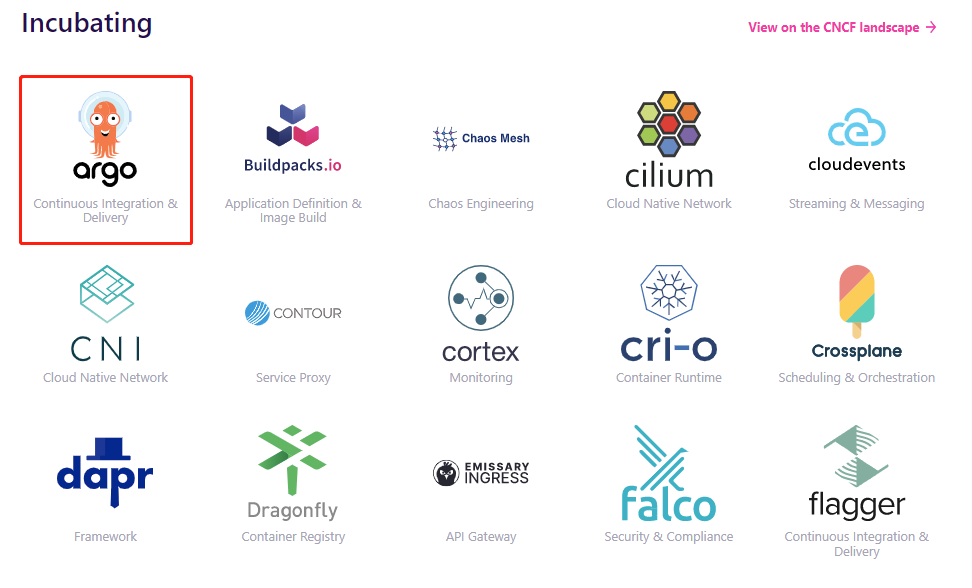 GitOps can bring the following advantages to the implementation of Apache DolphinScheduler. 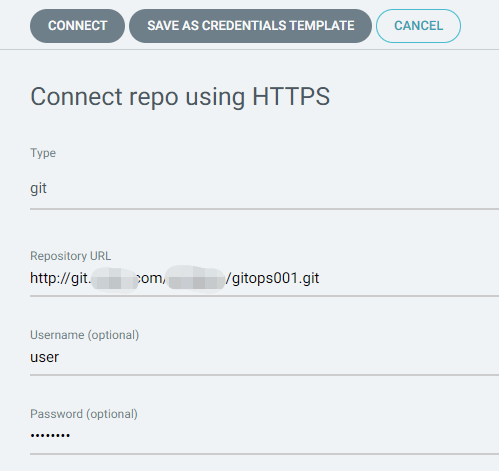 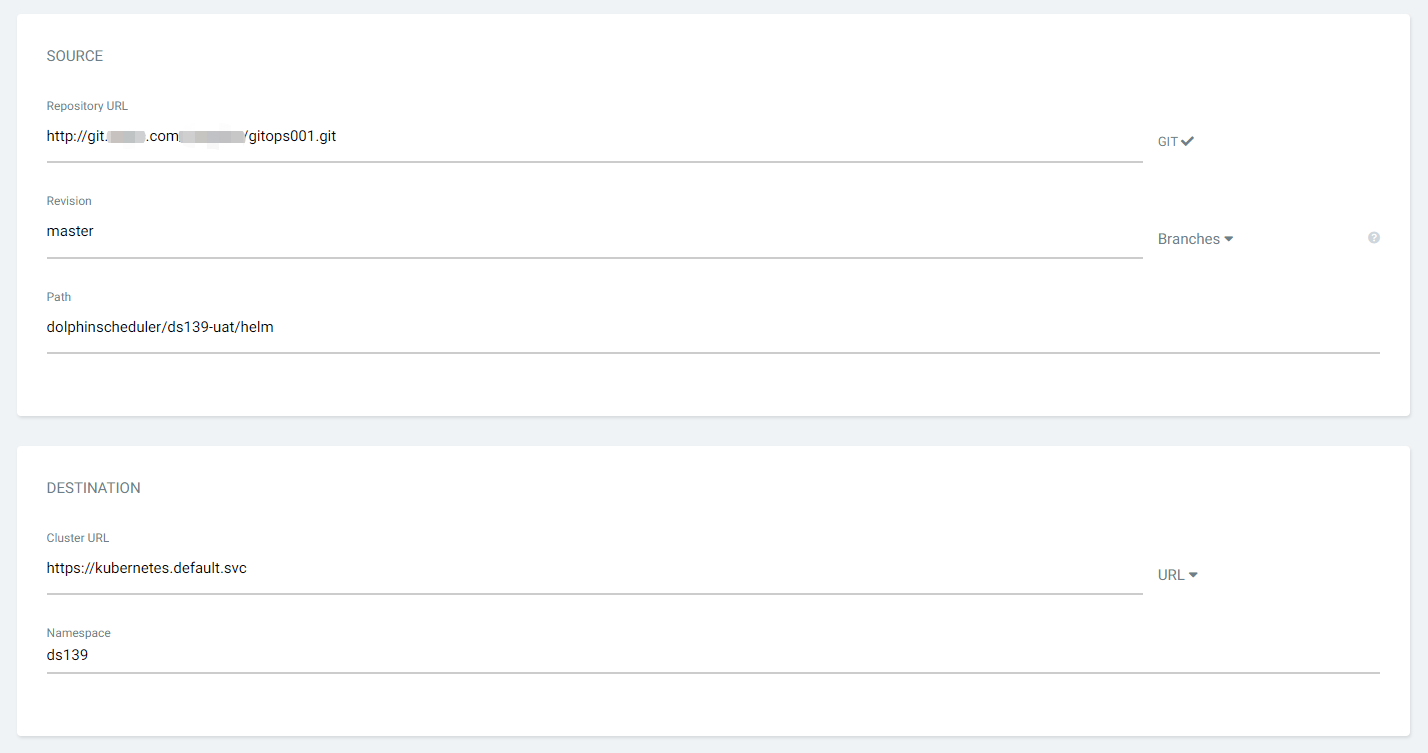 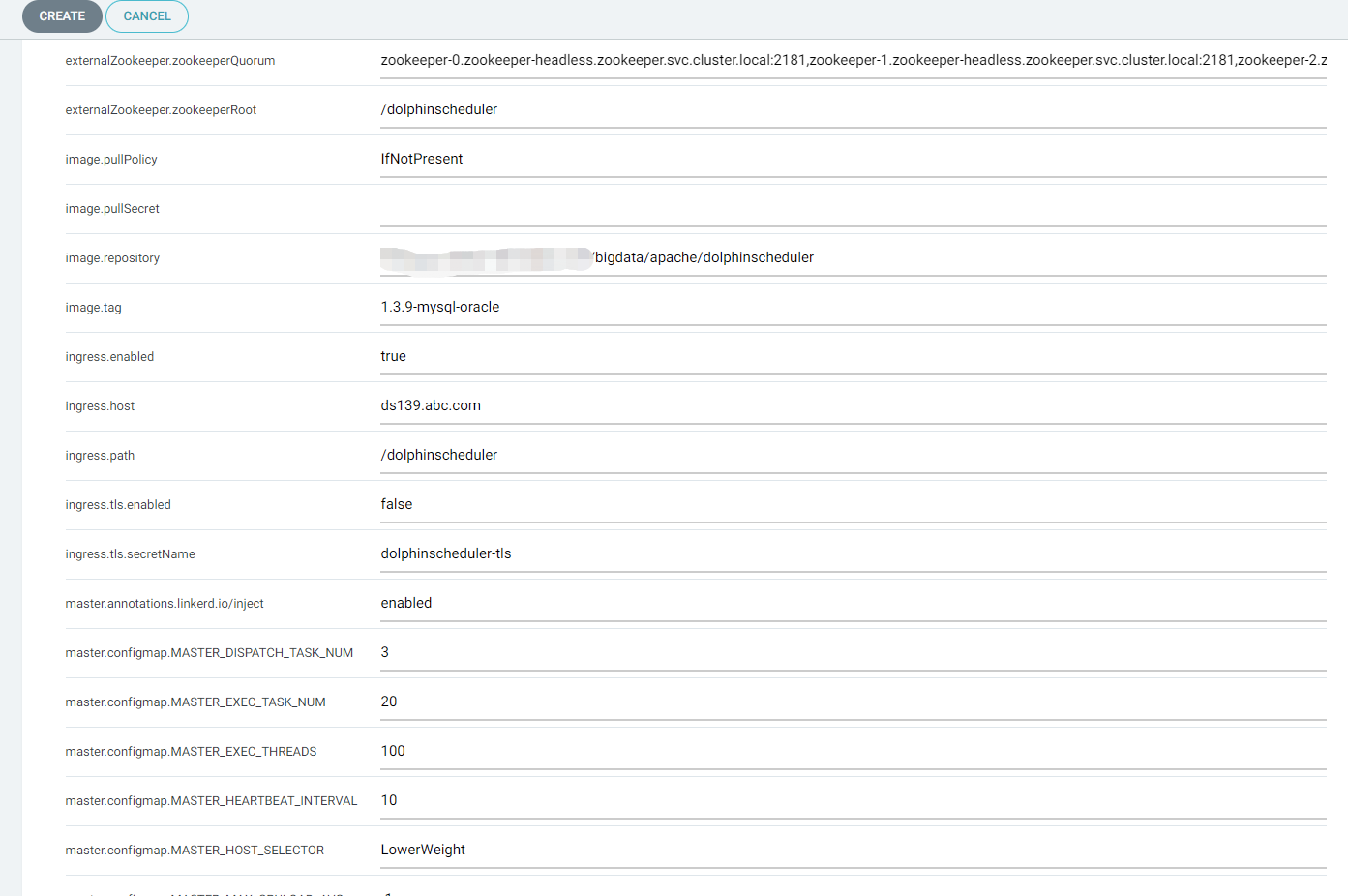 Refresh and pull the deployment information in git to complete the final deployment work. You can see that pod, configmap, secret, service, ingress and other resources are automatically pulled up, and Argo CD displays the commit information and submitter username used by git push before, which completely records all release event information. At the same time, you can also roll back to the historical version with one click. 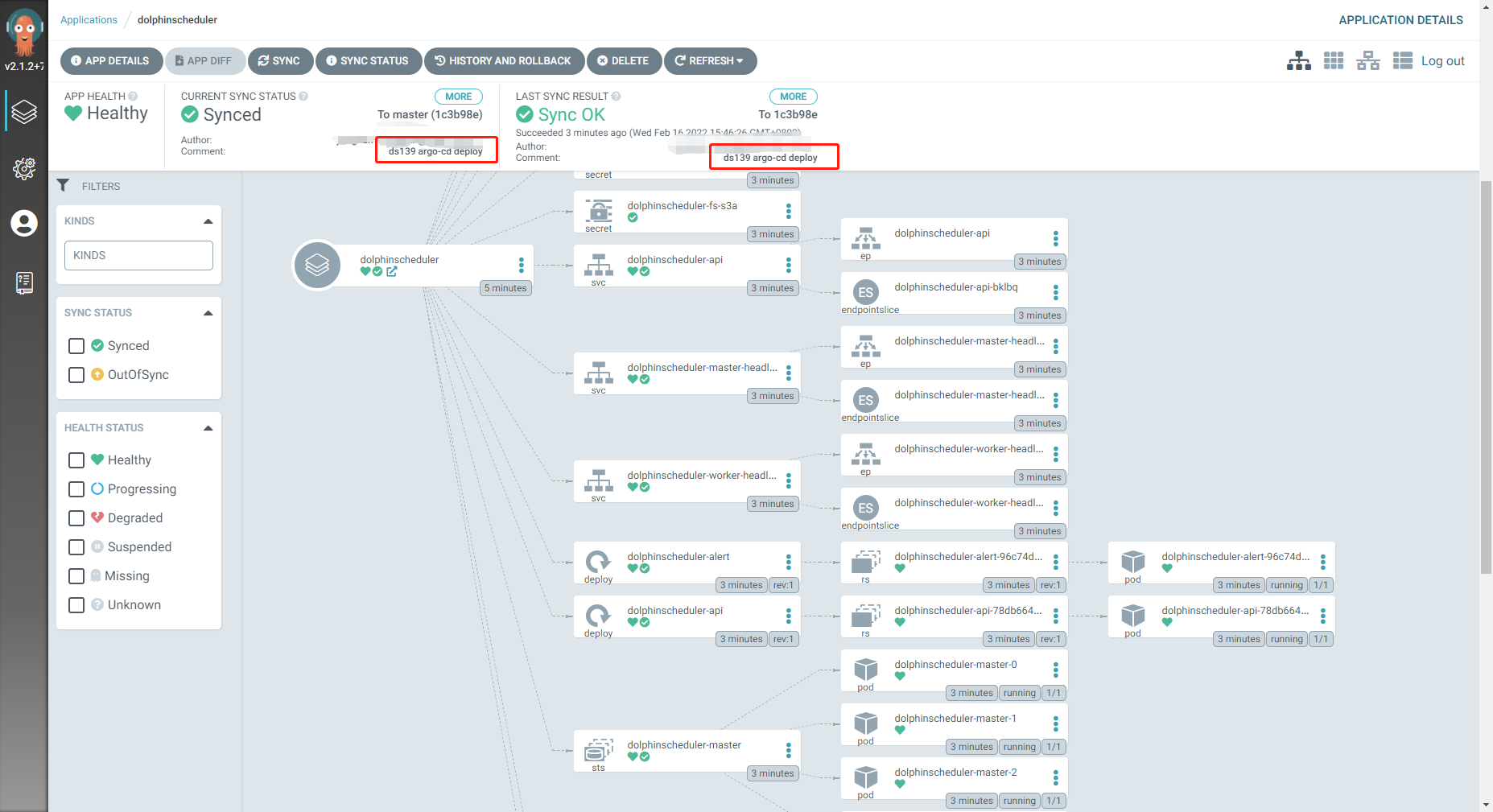 We have configured ingress, and the company can easily use the domain name for access by configuring the pan-domain name within the company; 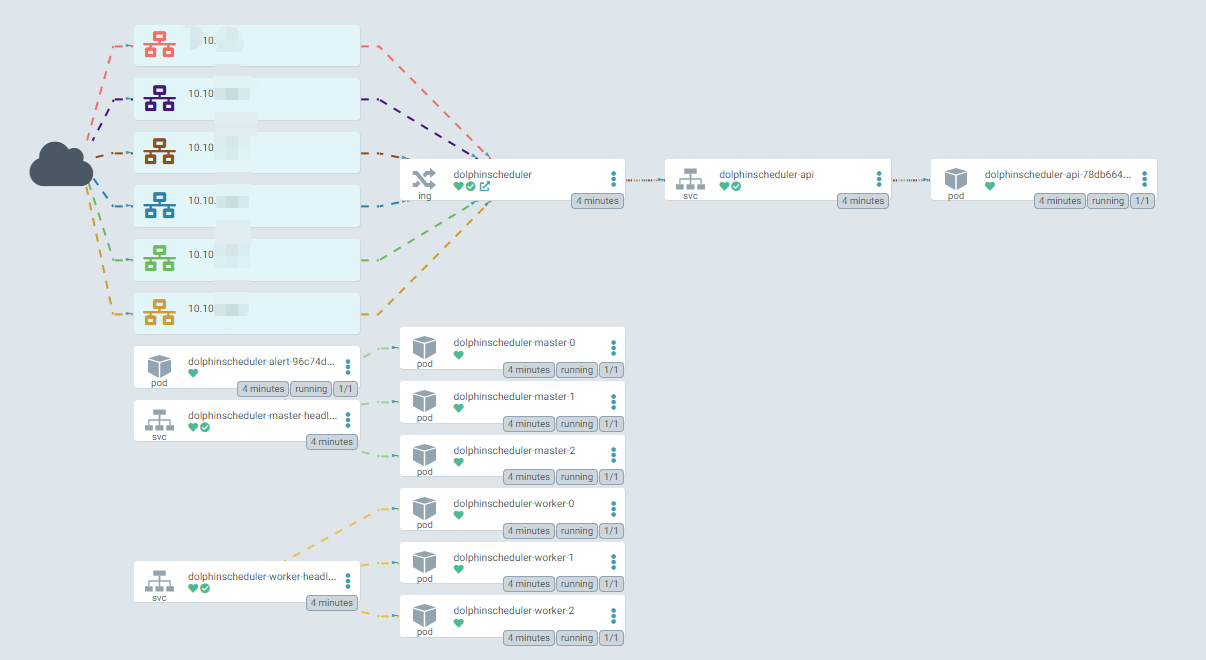 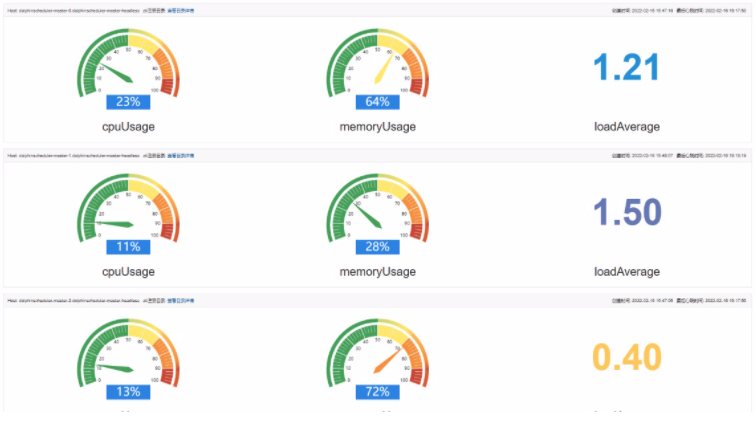 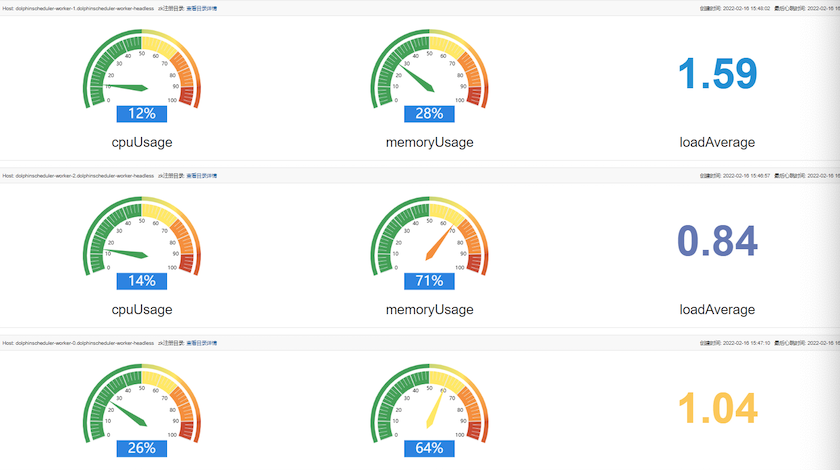 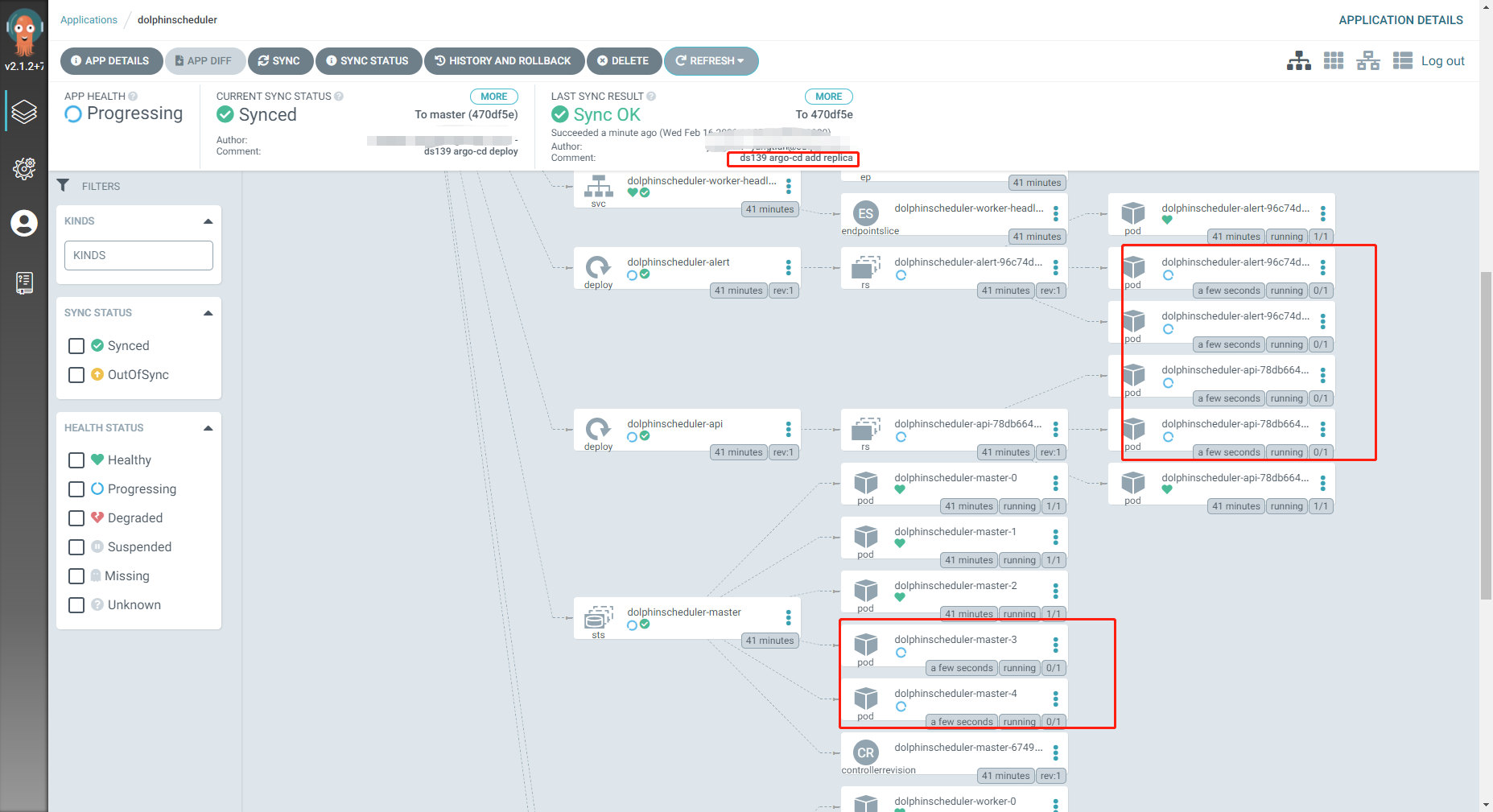 How to configure the integration of s3 minio is one of the FAQs in the community. Here is the method of helm configuration based on Kubernetes. 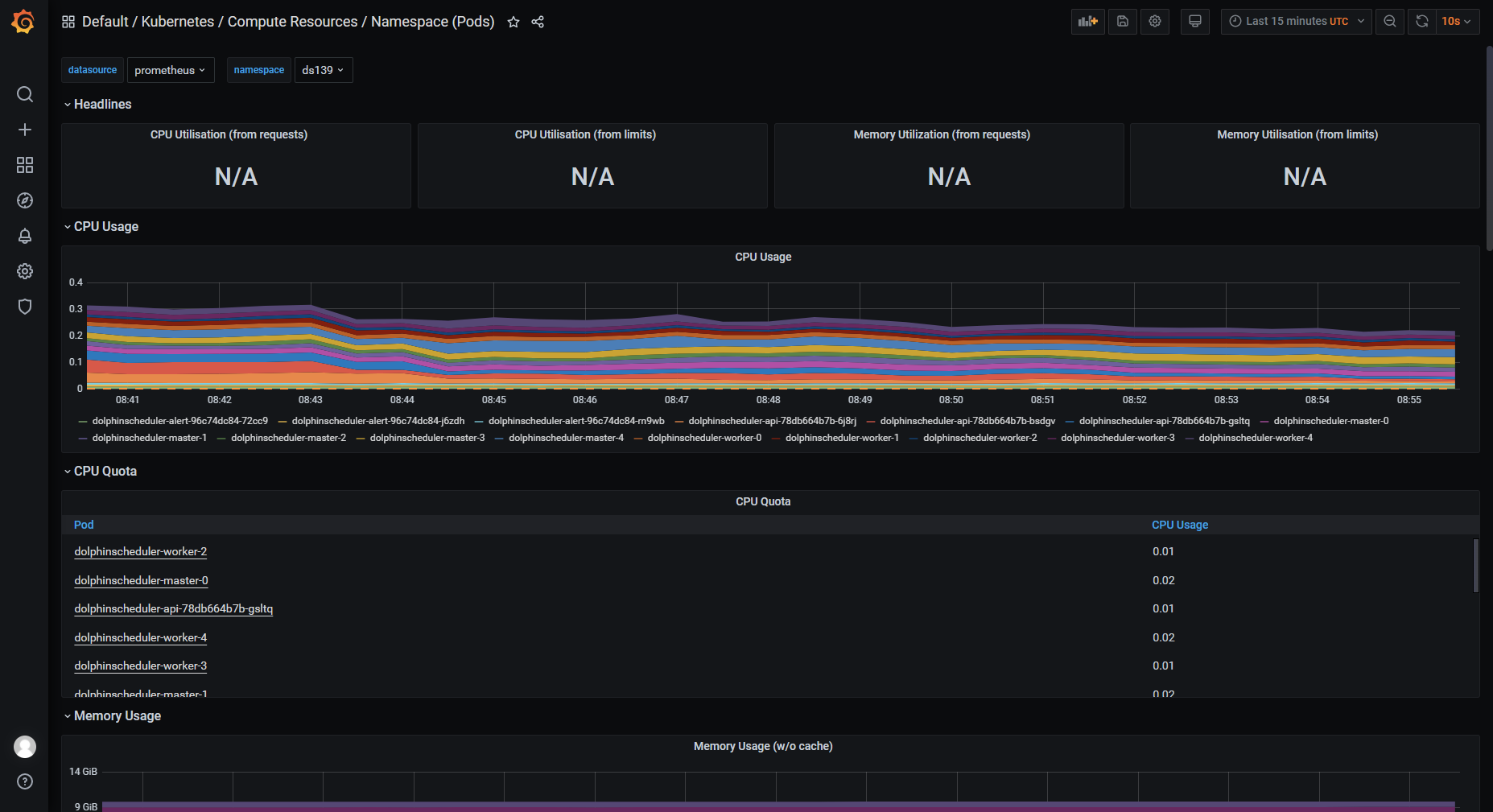 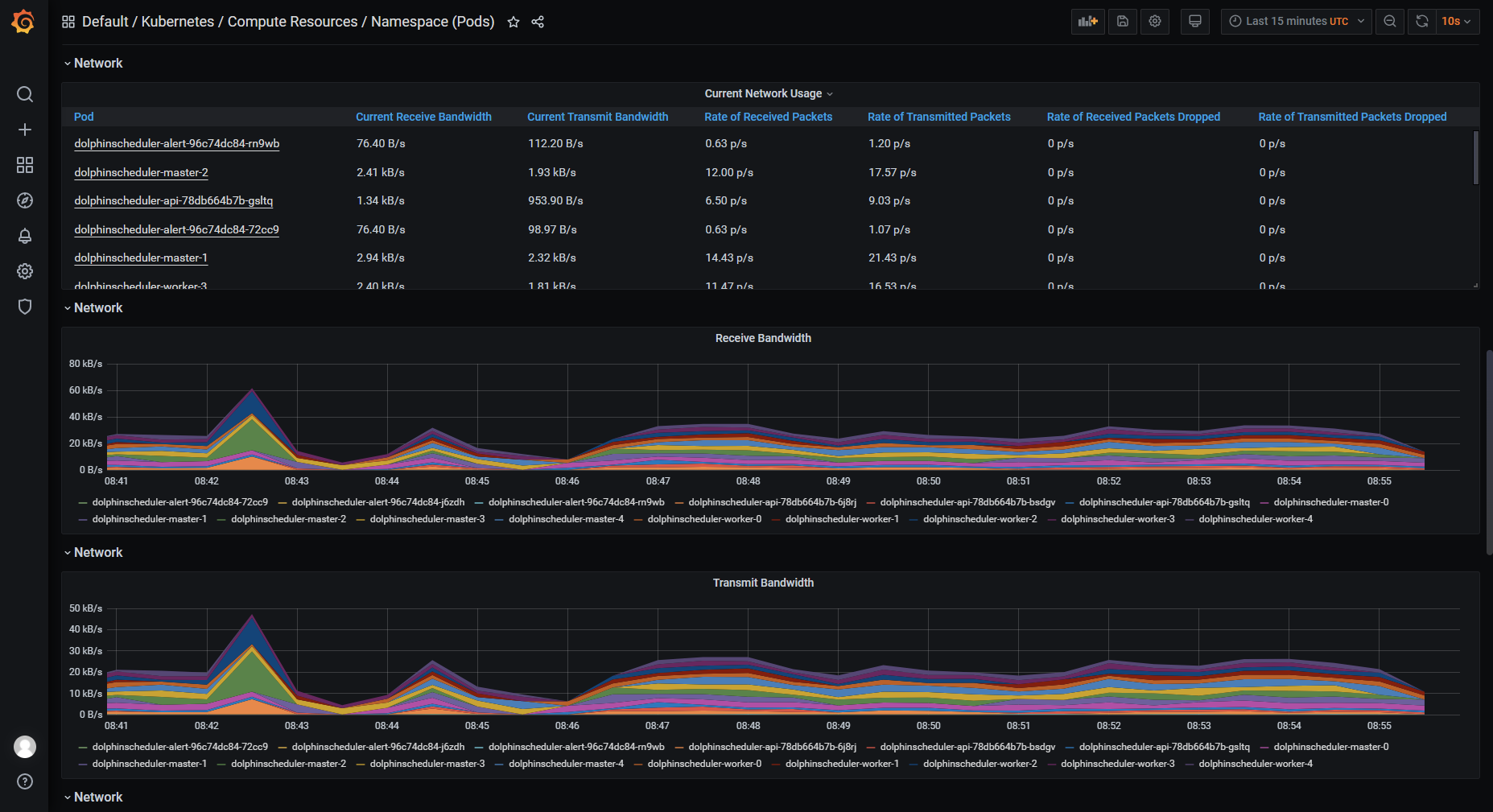 We use linkerd as a service mesh product for integration, which is also one of CNCF's excellent graduate projects. 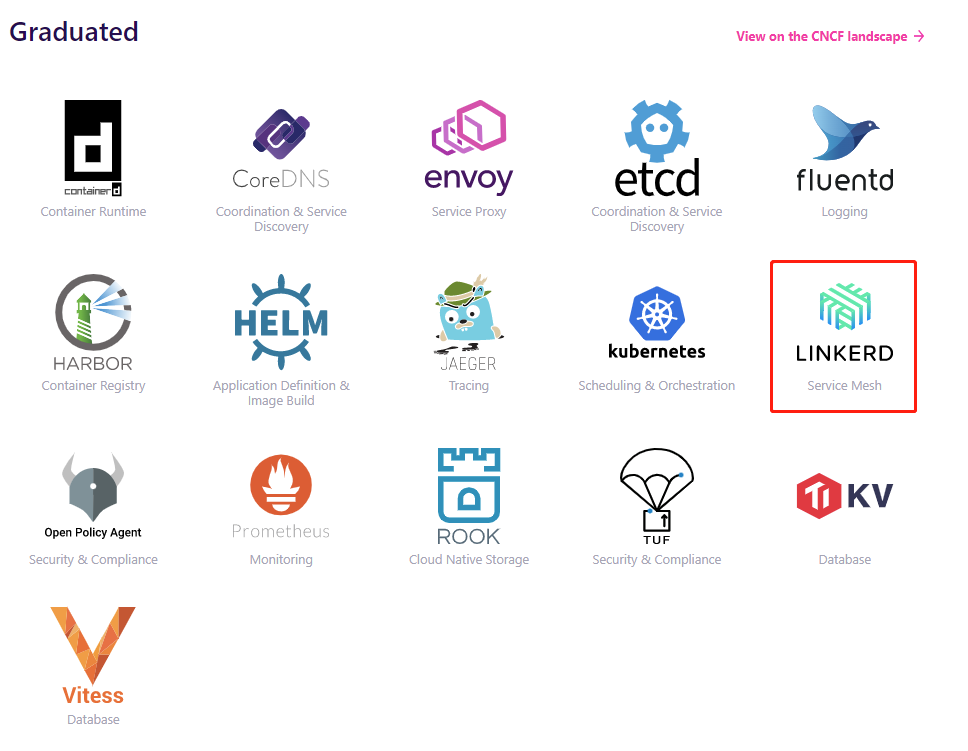 Just modify the annotations in the value file of the Apache DolphinScheduler helm and redeploy, you can quickly inject the mesh proxy sidecar, as well as master, worker, API, alert and other components.

You can observe the quality of service communication between components, the number of requests per second, etc. 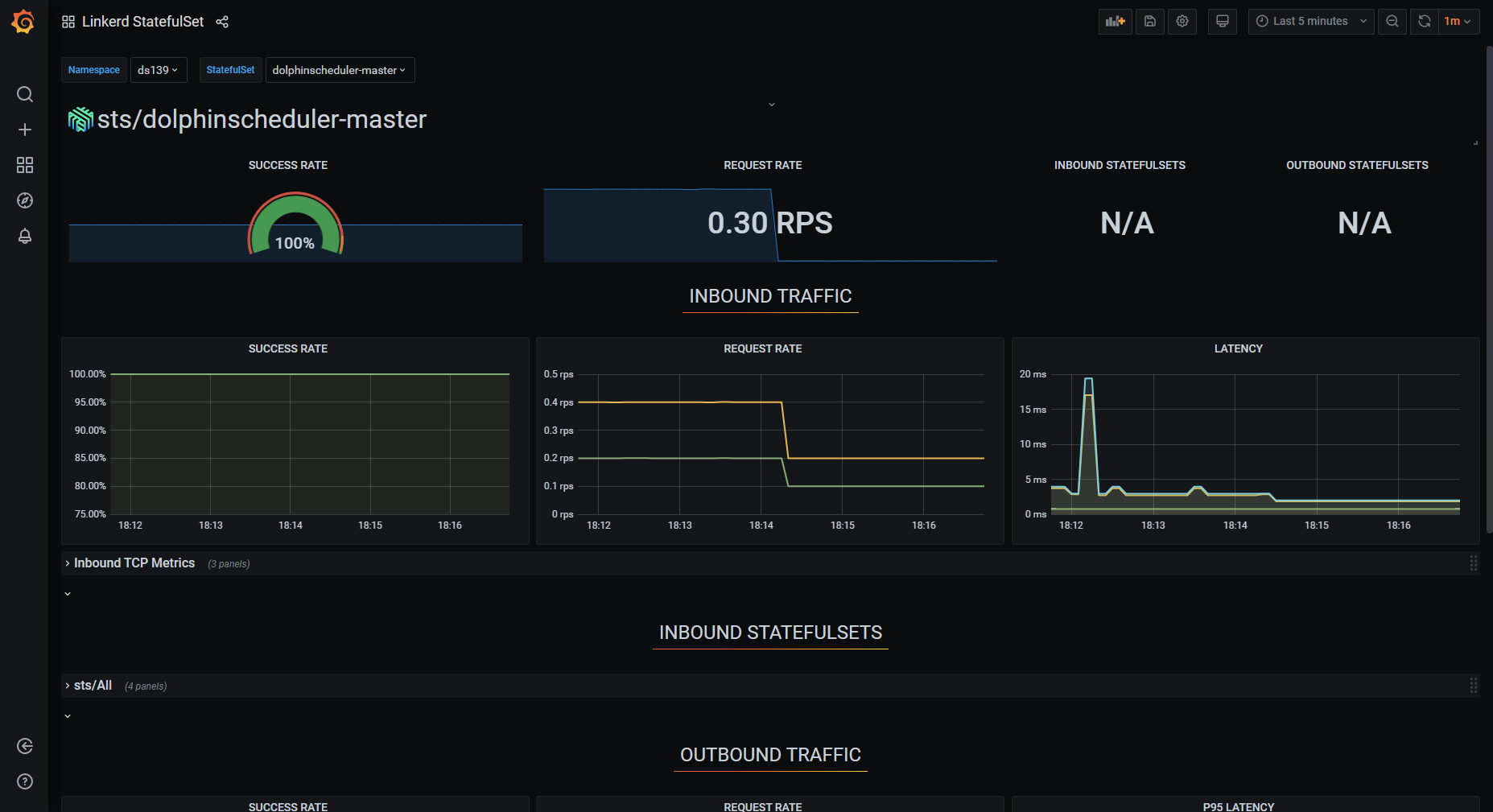 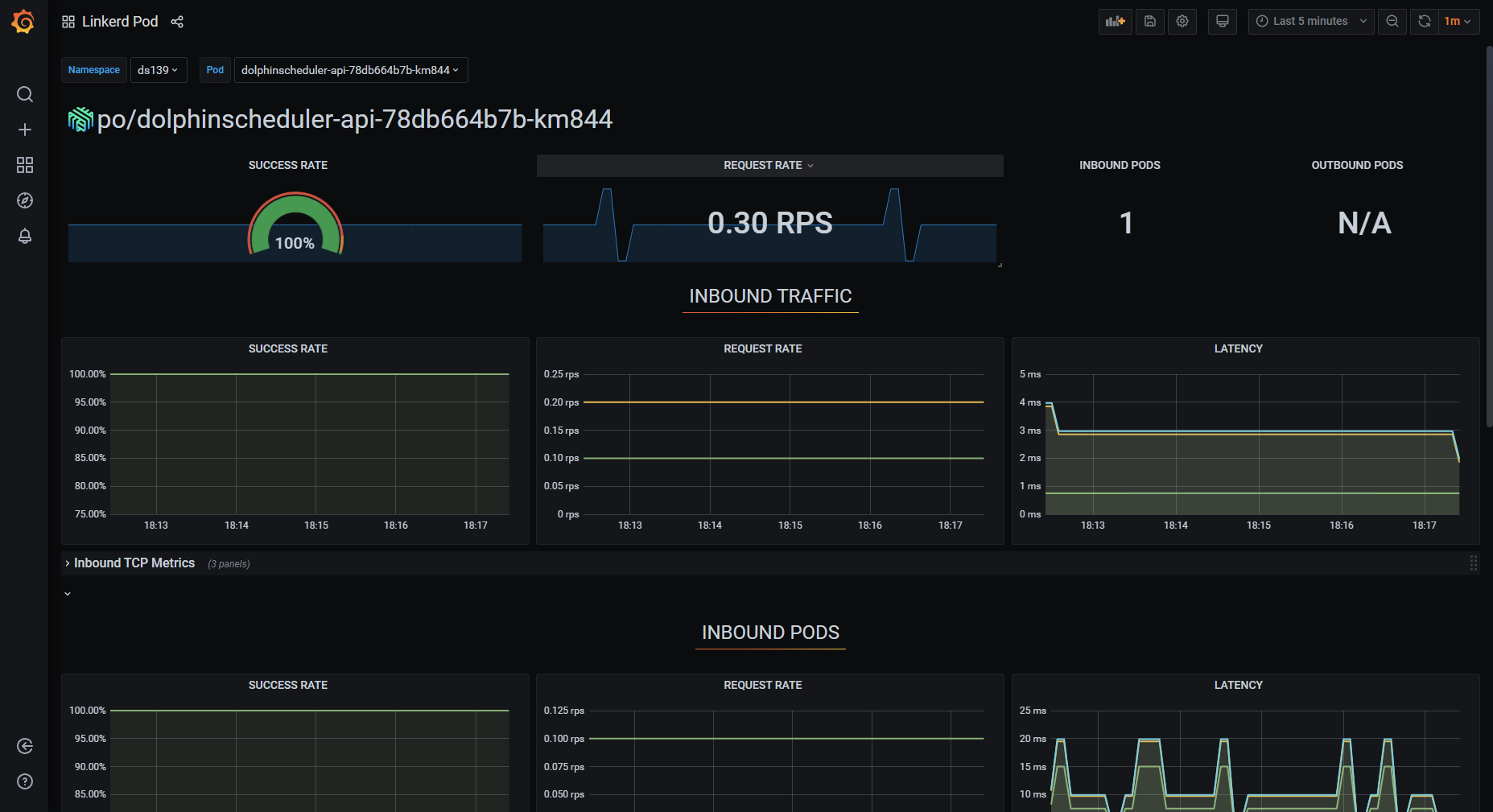 Prospects on Apache DolphinScheduler Based on cloud-native Technology

As a new-generation Cloud-Native big data tool, Apache DolphinScheduler is expected to integrate more excellent tools and features in the Kubernetes ecosystem in the future to meet more requirements of diversified user groups and scenarios.

Finally, I strongly recommend you to use Slack to communicate with the Apache DolphinScheduler community, which is officially recommended！ 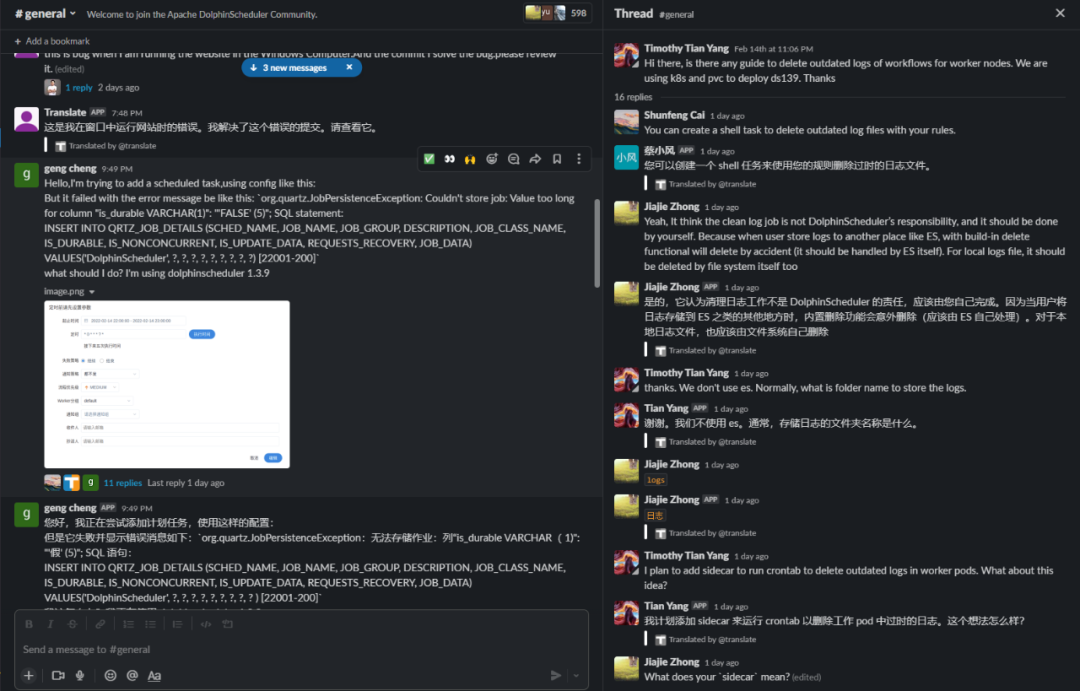